Among the cornucopia of events this weekend at Wauconda Winterfest is a local phenomenon that has unlikely exceeded expectations and continues to grow.

Born out of winter boredom, an interest in Olympic curling, a few beers and a frozen Bangs lake in the backyard, John Bader created a hybrid sport and called it burling.

Inspired by curling, with elements of bocce and shuffleboard on ice, burling began as a small gathering of Bader and friends.

Players from opposing teams alternate sliding 4-gallon jugs of frozen water across the ice onto a hominy box, which is unattached and moves if hit during the game.

One or two points are scored depending on the distance from the target and whether the jug remains upright. A team wins by scoring 21 points or more until they lead by 2 points.

What began modestly six years ago as a neighborhood social event has been organized into the Wauconda Burling Association, a league of 16 burling houses, or teams, and counting.

“It’s a complete anomaly. It should never have happened,” said Bader, a sales and marketing professional and Wauconda Park District treasurer.

Yes, burling is a thing.

Burlers played on Bangs Lake at Wauconda Winterfest last year. What started as a fun winter activity for inventor John Baden and a group of friends has grown into a 16-team league with a board of directors.
– Courtesy of the Wauconda Burling Association

As many as 300 people are expected to take part in an open burling tournament on Saturday at the Wauconda Winterfest, held at Lindy’s Landing on Bangs Lake. The two-day festival is scheduled for Saturday and Sunday. Visit https://lindyslanding.com/ for schedules and attractions.

The new sport began when Bader and his son-in-law were watching curling during the 2014 Winter Olympics and began gazing at frozen Bangs Lake 40 feet away.

“We researched curling and curling stones only to find that they were (and) incredibly expensive,” he said. “So we went back to frozen jugs, and burling was invented.”

Hominy became the prime target due to the can’s size, weight and durability, Bader said.

From those humble beginnings, the Wauconda Burling Association has been organized as a limited liability company. The silhouette burler name and logo are registered trademarks. 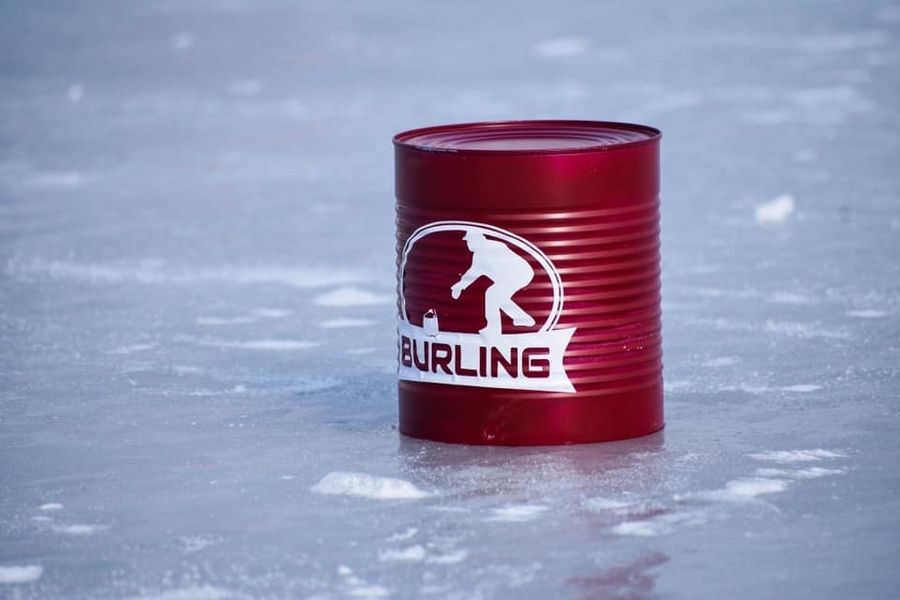 A hominy box is the target of a local sport called burling. Inspired by curling, the game involves teams racking up points by tossing one-gallon jugs of frozen water at the target.
– Courtesy of the Wauconda Burling Association

Team names include clever puns and players wear distinct, uniform jerseys with professionally designed logos by Tracy Lehmann of Bungalow Printing in downtown Wauconda. Many houses have team flags. The merchandise is popular.

The news has spread to include travel teams from Mundelein and Palatine. There is a regular season with rules, regulations, schedules and standings.

Weekly matches are played at six “tour sites” on Bangs Lake. Games begin with the national anthem and include public announcements, chili stands, hot drinks, and even nighttime games under the lights.

Bader had gone it alone as commissioner of the association, but recently asked for help running what has become something of a friendly competition and winter social club. A group photo of burlers at Wauconda Winterfest last year.
– Courtesy of the Wauconda Burling Association

“We have 150 people involved. We’re an LLC. They have to sign waivers,” said Bader, who still seems impressed with what happened.

“We haven’t had a forfeit (this season),” he said. “Everyone showed up, all 16 teams for five straight weeks.”

The IncrediBURLS, which includes Wauconda Mayor Jeff Sode and eight other current and former village officials, is among the newer teams.

Village chiefs try to be present at various events, and the burling was an opportunity to engage in a less formal way, Sode said.

“There’s a bit of skill, but pretty much anyone can play it,” he added. “It’s competitive, believe me, but it’s on a friendly level.”